It used to be that we  couldn’t trust what we found on the internet. There are still certainly many cases where that is true, but there are now some very helpful blogs and websites out there that are well researched and documented. As my current interest is medicine in the early modern period (which was almost exactly the same as medicine in colonial New England), I have found some blogs that tie right in. They are written by experts in the field and are well documented.

Early Modern Medicine is written by Dr. Jennifer Evans, lecturer in history at the University of Hertfordshire. Her research interest is medicine, the body and gender in early modern Europe. Recent blog posts covered topics ranging from treatment and beliefs about the heart and heart maladies, rheumatism and humors, and using unicorn horns to treat poison. Other experts in the field often post as well. On her blogroll page, she has a nice listing of related sites. She is on Twitter at @UniofHerts

The Recipes Project: Food, Magic, Science and Medicine is written by an international group of scholars interested in recipes. Recent posts include medicine as an exact science (using specific measurements so ingredients work in harmony rather than cancelling each other out), examining social networks using maps and documents to examine how recipes are collected for a 17th century manuscript, and a 17th century cure-all recipe. The Recipes Project can also be found on Twitter and Facebook (see the About page) and they had such interesting entries that I was distracted from blog writing for a while.  They also have a further reading page.

Hx: Medical Historia is written by Paul Middleton, a medical historian. Recent posts include early treatments for insomnia, the magic of the mythical unicorn horn that is included in many recipes, and sarsaparilla. He can also be found on twitter: @Paul_Middleton1

What are some of your favorite well-researched blogs to add social history context to your genealogical research?

This year I finally did something I have wanted to do for years: I attended the Harvest Dinner at Plimoth Plantation. For those not from this area, Plimoth Plantation is a living history village set in the year 1627. The interpreters each take on the role of one of the people that lived in the village in 1627 and do not break that role.

It was a bitterly cold day and I braved the village just to get myself in the mood and to have some sympathy for my ancestors who didn’t have the warm clothes that I have. The buildings were drafty.

The dinner was wonderful. Lots of meat and fish. My favorites were a rice pudding and a cabbage dish. I don’t usually like seafood, but the mussels were delicious. We even had some of the interpreters providing entertainment and conversing with us. The full menu can be found here. Recipes can be found in the Pilgrim Seasonings blog written by Kathleen Wall of Plimoth Plantation. 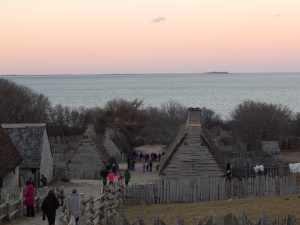