Today the Hartwell Tavern, typically associated with the Patriots in Lexington and Concord, invited two Loyalist regiment re-enactor corps, to educate the public about Loyalists. I spent time with members of the McAlpin and Parker regiments, learning more about the social history of the Loyalists.

This is the 240th anniversary of the Battle of Saratoga. Both corps supported Burgoyne’s campaign, which ended in disaster in September, 1777 at the Battle of Saratoga. Rather than re-enacting any battles this year, the corps are focusing on the social history of the Loyalist refugees.One of the rooms was set up as to mimic what conditions may have been like. 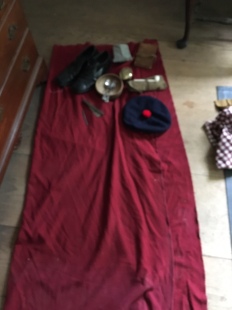 Throughout the war, Loyalists found themselves stripped of their land or in fear for their safety. Many fled to Canada in severe conditions. They recounted the story of 5 women and almost 30 children who arrived in November with just one pair of shoes between them. My ancestor lost everything and blamed the death of his wife on the rebels for driving them out of their home.

According to the re-enactors, the British government and military weren’t  all that happy with the influx of Loyalists, who expected the British would help them get back their land and property in return for their loyalty. Refugee camps were set up, but no one know how to deal with them all as it was the first American refugee crisis. Since then there have been many: French Acadians, Native Americans, 19th century Mormons and others. What we are seeing today with the Syrian refugees is not new.

We may think of human shields as a relatively new invention, but it is not. Many male Loyalists fled, thinking their families would be safer if he was not there. The opposite turned out to be true in many cases. The rebels (Patriots)–pick your favorite term depending on which side you are on–would make it very difficult for the family left behind to leave. They had to get permission, and to quote the woman re-enactor, they were “very mean” when deciding what the Loyalist women and children could take with them. Often a mattress was permitted, while blankets were not. They thought that by keeping the wives and children of Loyalists in town would prevent the husbands and fathers from burning the town. Human shields.

Meeting with the Loyalist re-enactors today was a somber reminder that history repeats itself again and again. As we focus on our family history, understanding the social history surrounding our ancestors will help us better understand them.

You can learn more about these re-enactors at:
Peters Corps 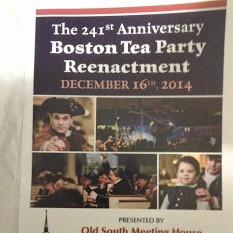 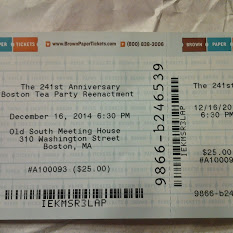 I attended the re-enactment of the Boston Tea Party on Dec 16. We were each given a program with a blue or yellow slip of paper. I later found out that the blue papers represented Loyalist views and the yellow papers represented Patriot views. I had been thinking of my Loyalist ancestor Thomas Sumner, so was happy to have a blue piece of paper.

The first part of the re-enactment was dialogue between actors about how to handle the tea on the ships. If you agreed you shouted “hear, hear” or “huzzah”. If you disagreed, you shouted “fie, fie” or “boo”. Most of the people around me were Patriots, but I stuck to my Loyalist part and, all in good fun and with lots of smiles, always shouted the opposite of my pew mates.

I was trying to put on Thomas’s shoes and try to think what he would have though. It certainly wouldn’t have been in good fun for him to be in opposition to his neighbors. As far as I know, he wasn’t in Boston, but he and his family were driven out of their home in Vermont and lost all their property to the Patriots. His views would have been sincere. He was a judge, and perhaps the oaths he had taken and  his occupation that involved upholding the law every day influenced his decisions. I doubt that it was an easy thought process though. Many Loyalists saw many problems with the king and Parliament, but in spite of that, retained their loyalty. All these thoughts crossed my mind as I shouted “fie, fie” or “hear, hear”. 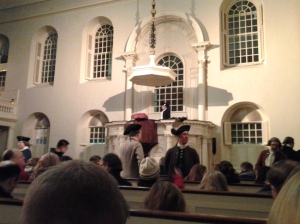 When the floor was opened up to us, I was the very first person at the mic to say my part. “Like all Englishmen we are universally represented in Parliament. The Patriots must stop complaining that we do not have a voice in England.” I wanted to do this to honor Thomas, who is not well known in my family, compared to our Patriot ancestors. Throughout the night I posted on Facebook as if I was a Loyalist.

As we left the meetinghouse and marched to the harbor behind a fife and drum corps (fun but not authentic), I continued thinking of what Thomas would have thought if he had been there. Would he have even gone to the harbor? Would he have tried to stop the ship raid? Since he wasn’t there, what did he think when he heard the news?

As I watched the Patriots throwing the tea into the harbor, the part of me that was channeling Thomas thought “you bloody fools!”. While perhaps nobody could know what would happen only 15 months later in Lexington and Concord, many feared that this would happen. Thomas may have been among those.

This was such a wonderful experience for me to put myself into an ancestors shoes. While I certainly don’t know what he was thinking and feeling, I could make some educated guesses that helped me see a historical event from a different perspective than I had ever seen it before. I am so glad I received that blue paper!

Today is the 25th anniversary of the fall of the Berlin Wall. This event led to expanded freedoms for millions of people in Eastern European countries that had been under Soviet Communist rule. Yet, embracing these freedoms did not come easily to many who had lived most of their lives under Communist rule. My sister served a mission for our church in Latvia in 2003-2005. She said that many of the older generation had lost hope, even though they had obtained their freedom in the early 1990s. They had lost the ability to make choices–even when offered choices—because they had been told all their lives where to work, what to eat and where to worship. When she first told me this several years ago, I was struck by how a government should yield such power over people that they could not change once that government was removed. This is perhaps an extreme example, but we know that political events and religious strife inevitable affected our ancestors–just as they affect us and our families today.

Let’s think about some political events that may have affected our ancestors. Changes in government are powerful political events. Think of England–going back and forth between staunch Protestants, at least one Catholic, and Protestants in name who leaned towards Catholicism, and for a few years, a Protectorate under Oliver Cromwell. Your ancestor’s fortunes could easily go from bad to good or vice versa depending on their political and religious leanings.

During the 1620s through late 1630s, thousands of Puritans came to Massachusetts to escape what they called the Popish religion of King James and King Charles and to worship as they wished. When the Civil War started and things were looking good for the Puritans the mass migration stopped and people remained in England, and many from the colonies returned to England. Migrating to a new continent with unfamiliar plants and animals, and recreating the culture they had known in England was a major undertaking.

Boundary changes, new laws, social policies, rebellions such as the Revolutionary War in the US, internal conflict that led to the US Civil War, and world wars are other examples that definitely affected our ancestors in one way or another.

Religious conflict is another source of external conditions that can wreak havoc on a family. Think of the witch trials (not just the Salem witch trials), the banishment of women and men such as Anne Hutchinson and William Rogers, and the many persecutions and wars that have been fought and continue to be fought in the name of religion.

While here in the US we celebrate our veterans on Tuesday and remember our many blessings later this month, spend some time thinking about your ancestors and how political and/or religious events positively or negatively impacted them. Please share here some of the events that you come up with.

While I was preparing a talk on social history using Levi Savage as a case example, I came across this 1899 newspaper article about him receiving reimbursement from the US government for alleged Indian depredations that occurred in the 1860s. The article was pulled from the Library of Congress Historical Newspapers section (a wonderful resource) and was published on February 14, 1899 in the Salt Lake Herald (pg 6).

Ever since finding this more than a year ago my interest has been piqued. The next few posts will follow my journey into learning more in general about Indian depredation reimbursements in general, and the specifics about Levi’s case. I will use newspaper articles, diaries and US congressional records, and hopefully other types of records as well. As much as possible, I will be filling in the social history of a time period in Levi’s life that must have been frightening as well as resulting in loss or damage of property using his records, government records and records of other people who also filed suit.

I was looking for something to read one night when I was home for Christmas and came across this book. I have really become interested in quilts since I first discovered Jennifer Chiaverini’s Elm Creek series. These novels set in the current day, but with strong historical themes, provide an easy to read and rich history of quilts.

I was fascinated by the way the author pulled together a story about individual women  involved in the Mormon migrations from the quilt(s) that they made. In the introduction she explains that she wants to tell the story of women using material culture. This is relatively new field of study focusing on the study of the role and meaning of historical physical items, such as quilts, that still survive. Cross carefully defines the qualifications for inclusion in her study, without any preconceived notions of which items will be included. Inclusion criteria included traceable history of the quilt from when it was made to the present, as well as the time periods and activities in which a woman must have been involved in with the Mormon church and migrations in the 19th century.

While none of my ancestors are highlighted in the book, by reading through the biographies of the women and histories of the quilts, I am able to get a strong sense of what it was like to be a female Mormon pioneer in the 19th century. The photos and description of the quilts provide a reminder that this was a real person, not just a name and date on a piece of paper, that made these.

How have you used material culture historical studies in your genealogical research?