I was recently introduced to Rhys Bowen’s Molly Murphy mystery series. The series starts with the main character fleeing Ireland and coming through Ellis Island into NY around 1900. The accounts of the landlord system in Ireland, the cramped quarters of steerage, and the confusing passage through Ellis Island is in line with what I have read about those. The second book delves more into life in New York at the turn of the 20th century–again in line with what I have read, although I am not an expert in this time period.

I find reading these mysteries more fun than reading straight history books. I also find that due to the liberties of character development allowed in fiction that are not allowed in non-fiction, that I can get a better feel of the times and the characters come to life.

What are your favorite historical fiction authors?

As a follow-up to the previous post about avoiding pinball genealogy through the use of research plans, I have created a research plan to learn more about the Loyalists so I can better understand Thomas Sumner. This research plan is a social history research plan, and not the kind typically used in genealogy to find a new name, date, or place. However, the idea and strategies are similar.

OBJECTIVES
Objective #1: Learn what motivated the Loyalists and why many had to leave and where they went.

Objective #2: Learn what challenges they faced and what life was like for them in the colonies and their new location.

Objective #3: Learn some of the possible reasons why Thomas had to leave, while some of his family members with similar political views were allowed to stay.

SUMMARY OF WHAT IS KNOWN
I have read that about 1/3 of the colonists were Patriots, 1/3 were Loyalists and 1/3 were somewhat neutral. Depending on locale, Loyalists were persecuted and subject to confiscation of their property (voluntarily or otherwise) and physical violence, including tar and feathering. Thomas lived in Vermont and was well-connected as a judge. He was forced to leave because of his views and lost his property. He went to Nova Scotia (I think) and submitted several petitions to the English government for reparations for the property he lost. He presumably died in Toronto, although at least one of his children returned to Vermont and settled there.

Read each of the books listed above and locate additional relevant resources in the footnotes and bibliographies for each book. The first 2 books provide background on Loyalists in general, the 3rd is the true story of murder by a Loyalist woman. These will provide answers to Objectives 1 and 2. Once this is done, I will draw up a research plan for Objective 3.

Now that the timeline of personal information such as births, marriages, deaths,military service, job history and family moves has been created, it is time to look for external events to add to the timeline. Wars, major historical events at both the national and local level, and disasters and epidemics are all examples of external events.

Let’s start with historical events.There are several websites you can use that will help generate this list. Also use your own knowledge to add historical events to the timeline. This is one website that I like: http://www.ourtimelines.com/index.shtml. Let’s look what was going on during Levi’s lifetime (1820-1910). The generated list is very long. You can go here to see the entire list. Timeline for Levi Savage for historical events

Below I have listed the events that may have either directly or indirectly affected Levi or his family. As with any information pulled from the internet, the dates listed below need to be backed up by other sources.

Whenever you are thinking about your ancestor, you should be asking yourself questions. Did anyone in Levi’s family contract cholera? Do any color photographs exist of Levi and his family? Did he own a car, or did he ride in one that may have been owned by his children? How was he affected by the financial crises? I hope to be able to answer some of these questions in my research.

Let’s look briefly at some important events during Thomas Sumner’s life. The full list can be found here. Timeline for Thomas Sumner of historical events

This timeline seems to focus more on the US and selected European events. Since he was living in Canada for about the last 50 years of his life (I think), I should find a timeline for Canada and add that.

Notice that during his lifetime the Inquisition was ongoing. It was starting to abate during the 18th century, but was not abolished until 1808. Also note that convictions for witchcraft were still possible until shortly after his birth. This is a reminder that he was born in a time when more enlightened and progressive ideals were coming about, but that much superstition still existed.

See here for more information about the history of the Inquisition.

Taking advantage of both free and paid opportunities to learn is an important part of being a genealogist and social historian. There are many, many opportunities for learning online and in person. I will cover many of them in subsequent posts, but would like to start first with a weekly podcast that focuses exclusively on authors who have written a book about some aspect of New England history.

Marian Pierre-Louis’ podcasts cover diverse topics such as Louisa May Alcott’s mother, Thanksgiving (with a culinary historian at Plimoth Plantation), the poorhouses in Massachusetts, and the murder of a man by his wife in colonial New England. Kathleen Wall, the culinary historian, exposed some myths about early food in Colonial America and opened up about what they did eat and drink. The murder story was interesting to me because both the wife and her husband were Loyalists and she used soldiers in her plan to murder her husband when she became pregnant by one of the soldiers. The author in this podcast was very knowledgeable about the entire period, social customs, and what it meant to be a Loyalist living just outside of Worcester.

These podcasts, and others exploring the rise of luxury items in New England, the Rhode Island Campaign in the Revolutionary War, international commerce and trading in New England, mourning jewelry, preserving family archives, learning about the common people in colonial New England and more, are available for free via iTunes or at her blog.

What a treasure for the social historian and genealogist. With rare exceptions, each guest on the podcast has written a book which you can utilize for further information about a topic that catches your attention. I hope you check out this resource. Tell me about your favorite genealogy and history podcasts.

Once you select an ancestor that you want to learn more about, one of the first steps is to build a timeline of that ancestor’s life. Start with the basics such as birth, marriage and death. Add other information such as moving to a new location, war(s) that the ancestor either fought in or lived through, births and deaths of her children, and other significant events. This information may come from documents or family legends. Either is OK to start, although you will eventually want to back up everything on this timeline with the appropriate documentation. The important thing is just to get it on paper, with dates if possible. Set it aside for a couple of days and then come back and see if you can add anything else.

Here are two examples of the same timeline. I did one in Excel and one in Word. The format doesn’t matter–just use whichever you are most comfortable with. Pen and paper work well too. 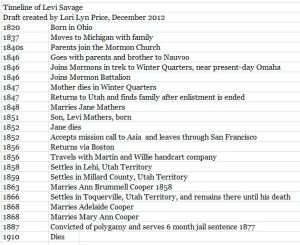 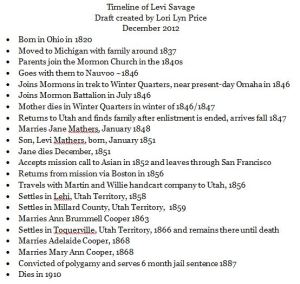 It’s clear that I know a lot about Levi Savage. I could have included even more. Most of this is knowledge that I already have in my head from family stories and his diary, but as I start writing up his story, I need to cite sources such as diaries, vital records and census records.

Clearly, there is a lot more work to be done on this timeline.

But, whether you are starting with an ancestor about whom much is known, like Levi, or an ancestor like Thomas where much less is known, the process of fleshing out their lives through historical and social research is the same.

This week, create a timeline for the ancestor you have chosen. I’d love to hear feedback about what interesting things appear on your timeline.

A future post will discuss expanding these personal timelines by including external information on historical events, disasters and epidemics, wars and other important events.