James is the brother of my 3rd great grandmother.  He fought for the Union in the Civil War and was killed leading a cavalry charge against a surprise attack from Confederate forces on August 11, 1864. He left behind a sweetheart, but was not married as far as I know. Since he has no descendants, I wanted to give him a special shout out on Memorial Day. 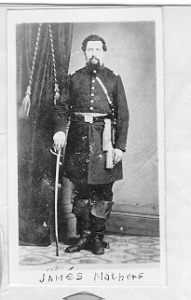 Most of my ancestors were out in Utah by the time the Civil War started, so Civil War service in my family is rare. Perhaps that is one of the reasons James holds a special place in my heart. Family was dear to him. Here is a picture of James with his little sister Annie. He came all the way out to Utah with Johnston’s Army just to meet his little nephew, Levi M. Levi remembers that Uncle James gave him a red pair of boots–he cherished that memory all his life.

US Civil War Soldier Records and Profiles, James “Enlisted in Company L, Michigan 6th Cavalry Regiment on 13 Oct 1862.Promoted to Full 1st Lieutenant on 16 Mar 1863.Promoted to Full Captain on 31 Oct 1863.Mustered out on 11 Aug 1864 at Winchester, VA.” The mustering out would be at his death. This website gives an overview of all the different places the Michigan 6th Calvary served, including Gettysburg.

In June 2006 I was privileged to find his grave in the national cemetery in Winchester, Virginia and honor him. 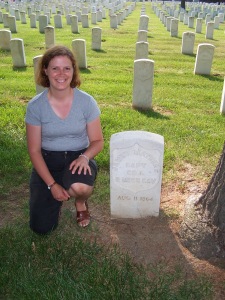 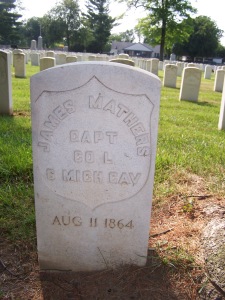